I love homeschooling for many reasons, but this one is definitely at the top of the list.  I love that on a gorgeous fall day, we have the freedom to spend it all outside.  Everyone agrees, children (and adults alike) need to spend more time in nature.  Books have been written about it (like this one), and curriculums have been built around helping children experience the natural world.  In some ways, I worry how effective these arbitrary nature activities help the cause, but applaud the effort nonetheless.  For our part, I feel extremely lucky to live on this farm and to do work that naturally brings us outside, the whole family.  Without trying too hard, the children learn all kinds of amazing things, and this knowledge settles in not only their minds, but in their bodies as well, while they play out of doors.

And still, because it is what comes naturally to me and because it is hard not to feel the need to “show” this knowledge they are internalizing, I try to turn some of this outside time into school time.  Depending on the child, this works fine.  My daughter loves to play school, so anything I call school is quite alright by her…even though she is still just four and we are not big believers in early academics and in reality, she still just wants to play more than work at learning that big stuff.  The middle boy can really take to a project if his hands are involved, so there are ways that this works for him and ways that it doesn’t.  He was find building letters out of wood scraps and fallen oak leaves for a little while, but it wasn’t long before he really wanted to get back to what he was making in every spare minute he has had for the last few days, his willow basket. 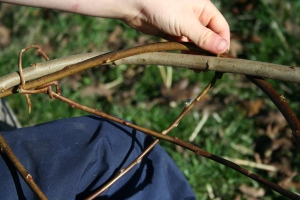 But my oldest, so bright and so keen, can take real issue with something he feels is not connected.  Yesterday, one of the sentences in his nature journal, imposed by the mama, was “Squirrels are NOT cute!”.  This makes him sound like a curmudgeon, but really, he was more than a little upset that we had gone to the park to “study” squirrels.  I had my reasons.  It is autumn, the squirrels are busy.  There are very few mammals that we can observe in nature (it’s mostly birds, reptiles, amphibians, and insects, right?).  And the act of observing and recording was what I was after, not the act of learning about squirrels.  Because like he said to me, we already know what squirrels looks like, how they are characterized based on their actions, what they spend their time doing, where they live.  This is all information they have gathered from simply reading books with squirrel characters in them and from seeing them while playing at the park.  We have stopped and watched them on the wires while getting in and out of the car in front of the Kung-Fu studio.

Still, this is hard to explain to a nine year old who doesn’t naturally feel a draw to studying things scientifically.  He really tried to put his foot down and claimed he would only draw in his nature journal…because that is how he studies the world.  He has always learned about things by creating with them through drawing or story-telling and imaginary playing, sometimes very elaborately.  So when he was told to write about the squirrels we had spent time “observing”, he expressed in that sentence what power he had at the moment to tell me just what he thought about the work we were doing.

And I understood, and laughed with him about it.  Because he really does have a soft spot for furry creatures, and he really does know how to take a closer look at the world.  And there is a lifetime ahead of him to study the natural world scientifically, if that is how he wants to understand it.  As he gets older, he might just find himself spending hours watching a squirrel in nature, just so he can produce a drawing that is just right.  And because this would have meaning to him, he wouldn’t even think about it as “studying”.  For now, he is quite content to spend hours in the tops of a tree.  And as strange as it may sound, this is the best kind of school time we can spend.

One thought on “When the sun is shining (and when it’s not), we are outside learning.”

for and in:: connection